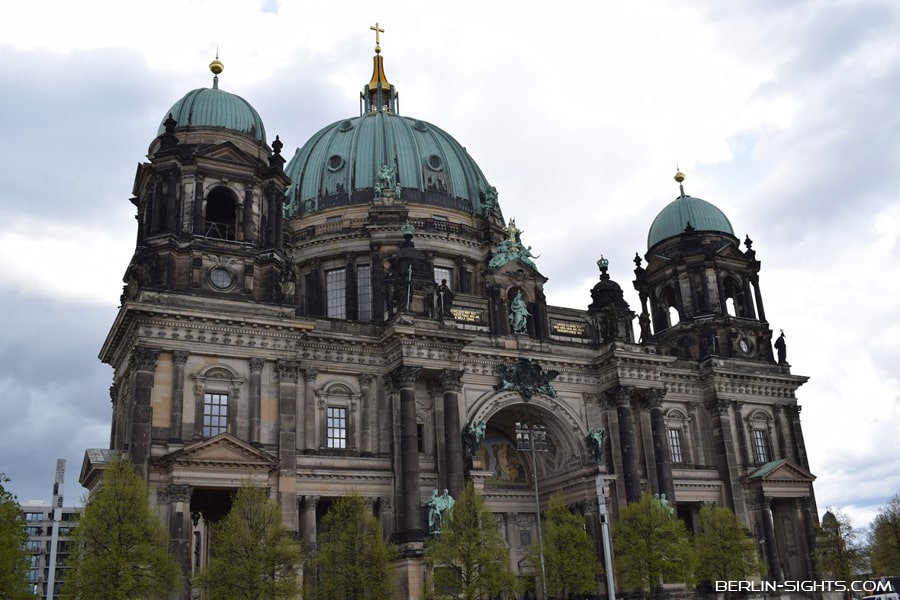 270 steps separate the visitors from a wonderful view over the center of Berlin with the television tower, Spree and Nikolaiviertel. The panoramic view (with a 360 degree view of the dome) from the dome of the Berlin Cathedral is therefore very popular with visitors. The impressive dome – with an impressive 33 meters in diameter – is only one of the highlights of the cathedral. Because it also has a lot more to offer. The baptismal and marriage church, the imperial staircase, the Hohenzollern crypt, the cathedral museum to name just a few. The church interior – elaborately decorated and artfully adorned and with its wonderful decorations, the Berlin Cathedral is one of the most beautiful churches in the city.

If you have the chance, you should attend a concert or church service in the cathedral. Then the historic Sauer organ sounds with its rich sound. It is the largest originally preserved organ from the late Romantic period. And another tip: right next to the magnificent cathedral is the World Heritage Museum Island, which is home to many famous museums. It is best to combine the visit.

The cathedral has a long history and has been renewed and rebuilt several times. The foundation stone was laid in middle age in 1465 with the construction of an upper parish and cathedral church on the Spree island. It was Frederick the Great who had the builder Johann Boumann build a baroque church with a drum dome in 1747. Karl Friedrich Schinkel renovated it 70 years later, inside and out, in a classical style.

Kaiser Wilhelm II also had renovations carried out. But this did not go far enough for him. He decided that the previous appearance of the cathedral was no longer grand enough and had it rebuilt in 1894, the design of the cathedral builder Julius Carl Raschdorff. This took place until 1905.

The Berlin Cathedral was badly damaged by the Second World War. Only 30 years later did the reconstruction of the church in the GDR begin. The outdoor work lasted until 1983. However, the interior work was not completed until 2002.

Architecture of the Berlin Cathedral

The cathedral is built in the neo-renaissance and neo-baroque styles. In the center of the Berlin Cathedral is the dome, which is flanked by four corner towers and rises a good 114 meters above street level. A lantern with a gold cross crowns this monumental dome. Julius Carl Raschdorff built the cathedral in the style of the Italian High Renaissance with baroque influences. The cathedral should be the answer to St. Peter’s Basilica in Rome. The cathedral – which stands on an area of ​​7200 m² – was divided into three parts as a central building from the beginning and originally consisted of the sermon church, the baptism and marriage church and the monument church. The monument church no longer exists today. The cathedral is now a listed building and is the largest Protestant church in Germany in terms of area.

Inside, the cathedral is also magnificent. It includes extensive New Testament and Church Reformation elements, ornamental mosaics, gold and statues. The most important works of art include the marble altar by Stüler and the marble font by Christian Daniel Rauch. In addition, the Baptism and Wedding Church houses a huge painting of the outpouring of the Holy Spirit by Carl Begas.

With over 90 burials from the end of the 16th century to the beginning of the 20th century, the Hohenzollern Crypt is one of the most important dynastic graves in Germany. Almost 100 coffins are in the crypt. Including lavishly designed sarcophagi by Andreas Schlueter for Friedrich I and Queen Sophie Charlotte.

Tickets and tours for the Berlin Cathedral

A visit to the cathedral is included with the Berlin Pass.