Brandenburg Gate – symbol of the unity of Germany 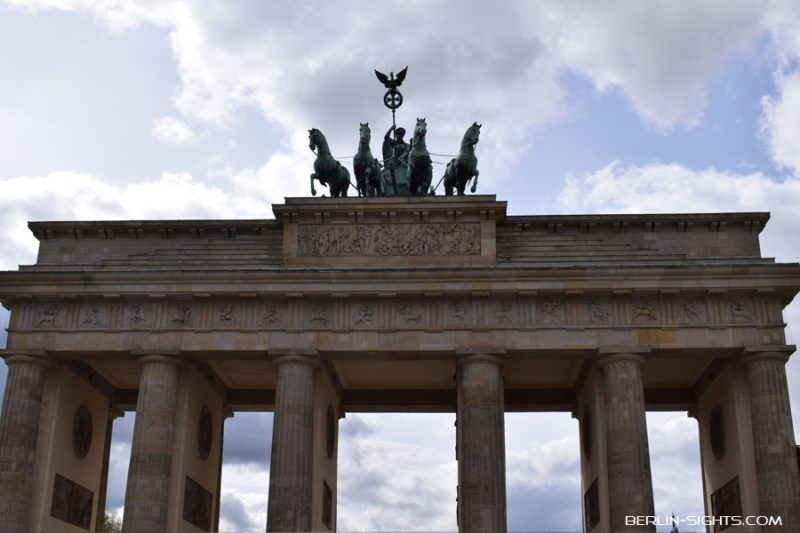 The Brandenburg Gate is located directly on one of the most beautiful squares in Berlin – Pariser Platz. Not far from the gate is the splendid street Unter den Linden. It leads directly to the square, which is surrounded by numerous buildings worth seeing, such as the Hotel Adlon Kempinski, the University of the Arts and the US Embassy, ​​as well as cafes.

The 20.30 meter high sandstone gate was designed by Carl Gotthard Langhans. With the six Doric columns on each side and the eleven-meter-deep crossbeams, it is modeled on the gates (Propylaea) of the Athens Acropolis. With the quadriga with its tip, the gate even reaches a height of about 26 meters. The gate is 62.5 wide and 11 meters deep. Each column is 13.5 meters high.

Originally the gate was called the Peace Gate. The gate, which was built between 1788 and 1791, was commissioned by the Prussian King Friedrich Wilhelm II. He replaced the previous gate with this representative triumphal gate and thus shaped the cityscape.

Quadriga on the Brandenburg Gate

The Quadriga was set in 1793. It was designed by Johann Gottfried Schadow and depicts the goddess of victory Victoria in a chariot. The two-wheeled chariot is pulled by four horses running side by side. The Quadriga was supposed to symbolize the coming of peace into the city – which also led to the original name.

After the defeat of Prussia in 1806, Napoleon brought the Quadriga to Paris as a sign of his triumph. In 1814, after the victory over the French emperor, it returned to its traditional place in Berlin.

Brandenburg Gate: symbol for the unity of Germany

Today the gate is also a symbol of the division and later unification of Germany. Because with the construction of the Berlin Wall in August 1961, the gate was in the restricted area (on the east side) and could not be visited or passed through by either east or west citizens. The gate opened on December 22nd, 1989 to the cheers of more than 100,000 people. With the fall of the Berlin Wall in 1989, the Brandenburg Gate became a symbol of reunification.

The gate is open to the public at all times. There are no fixed opening times.

Immerse yourself in the history of Berlin on a unique tour. Use one of the following offers to find out more about the gate.

Berlin » Brandenburg Gate – symbol of the unity of Germany