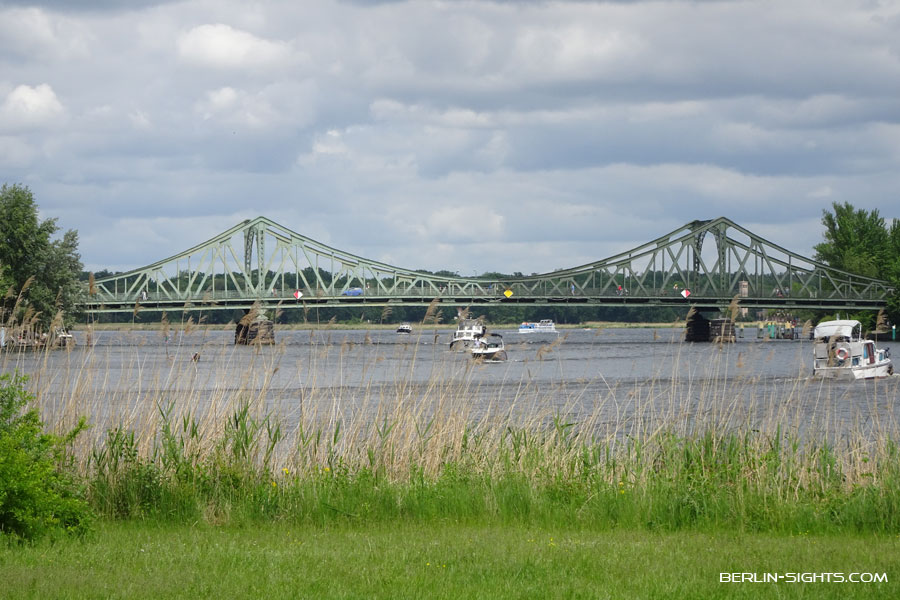 In the extreme southwest of the city, Berlin borders the Brandenburg capital Potsdam. Both cities are connected at this point by the Glienicke Bridge, which went down in history especially during the Cold War. It was the legendary location of the third and final exchange of agents between the USA and the Soviet Union, which was spectacularly staged on February 11, 1986, and gained worldwide fame. Its history has made it one of the sights of Berlin and Potsdam. Here you can find information about the Glienicke Bridge.

History of the Glienicke Bridge

The Glienicke Bridge was built in 1907 on Bundesstrasse 1. It leads over the Havel and connects Berlin and Potsdam. The name of the bridge is the nearby former Gut Klein Glienicke, where the Glienicke Castle is located today.

The state border between Brandenburg and Berlin or the city border with Potsdam runs directly across the middle of the bridge. At the time of the division of Germany, this also meant that it became the scene of a spectacular third and final exchange of agents. This was also made into a film in the movie “Bridge of Spies”.

At the site of today’s bridge, there were bridges that connected the two cities before 1907. The first wooden bridge connected the two cities from 1660 and 1777. However, it only served the nobility as a connection between the Potsdam palaces and the hunting grounds on the other side of the Havel. It was not until almost 100 years later that the bridge was opened to general carriage traffic and a permanent mail connection was established. In 1777 the bridge had to be renewed because the previous bridge was not designed for the increasing traffic. A new wooden drawbridge with handrail was built at this point. She also got sentry boxes on both sides.
The third bridge was built by Karl Friedrich Schinkel. This was inaugurated on September 30, 1834. This was used until today’s bridge was completed. In 1906, however, it was decided that the Schinkel Bridge was no longer sufficient due to the increasing motorized traffic. In addition, the Teltow Canal was opened on June 2, 1906 and the inland waterway ended at the previous bridge. The bridge therefore had to be replaced by a permanent bridge. The truss bridge with a broken steel structure was completed in 1907. Initially the bridge was called Kaiser-Wilhelm-Brücke. However, this name did not catch on, so that the bridge became the “Glienicke Bridge”. The bridge was adapted over the years, destroyed at the end of World War II and rebuilt in 1947.

From 1952 the bridge was closed to private car traffic and only opened again to everyone one day after the fall of the Berlin Wall, on November 10, 1989.

During the Cold War, the Glienicke Bridge was used for the exchange of people between the powers involved in the USA and the Soviet Union. Between 1962 and 1986 there were three exchanges with a total of 40 people on Glienicke Bridge. That is why it was given the name “Agent Bridge” by the media.

Glienicke Bridge as a sight

The spectacular past alone makes the Glienicke Bridge a historical place that should be planned when visiting Berlin. Today, among other things, two shades of green, on the Potsdam half in a lighter one, on the Berlin half in a darker one, remind us of the history of the bridge. A visit to the bridge can be combined very well with a visit to Potsdam. The Babelsberger Park with the Babelsberg Palace and the New Garden and on the Berlin side the Glienicke Palace, the Glienicke hunting lodge and many other sights are close to the bridge and invite you to visit. The landscape ensemble around the bridge has also been declared a World Heritage Site by UNESCO.

Tours to the Glienicke Bridge