One of the most famous landmarks of the city is the Kaiser Wilhelm Memorial Church on Breitscheidplatz in the Berlin district of Charlottenburg, near the Berlin Zoo, Kurfürstendamm and KaDeWe. The church was badly damaged in World War II. Today a 71 meter high tower ruin stands as a memorial against the war and is one of the best Berlin Sights. Here you can find information about the church. 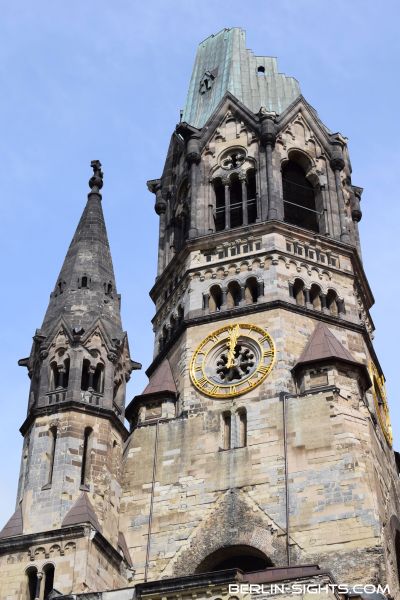 The Memorial Church had five bells of different sizes and weights. The bells were made of bronze and were made from guns captured in the Franco-Prussian War. In the Second World War, however, they were again melted down for war purposes. Today the hexagonal bell tower has a new bell ring consisting of six bronze bells.

The church’s tower clock, which was brought up to the state of the art after the war and has illuminated clock hands, is particularly beautiful.

Destruction and reconstruction with a 71 meter high tower ruin

The Memorial Church was badly damaged in 1943 during the Second World War. For a long time there was a dispute about the reconstruction and in what form. It was agreed to preserve the 71-meter-high tower ruin as a memorial against the war and to demolish one and the nave. Instead, a new four-part building ensemble was built. This consists of a nave, the church tower, the chapel and the foyer. The German architect Egon Eiermann implemented this in the modern style from 1959 to 1963.

Characteristic for the new building are the grid walls, which consist of more than 20,000 unitary glass windows that can be illuminated with LEDs.

The church is now used for services and events, and there is also a small museum inside the old part of the church.