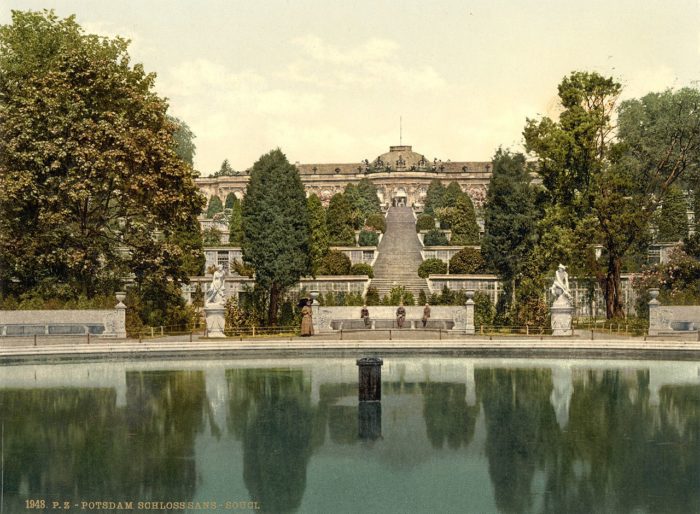 Sanssouci Palace and the Terraces of Vineyards around 1900, Photographer Unknown – This image is available from the United States Library of Congress’s Prints and Photographs division under the digital ID ppmsca.00357.

The Sanssouci Palace in the Sanssouci Park in Potsdam is the highlight of every trip to Potsdam. Let yourself be enchanted by the summer palace of Friedrich II.

The castle was built from 1745-1747 according to the ideas of King Friedrich II and plans by Georg Wenzeslaus von Knobelsdorff and is the center and highlight of the entire park. The castle is located northwest of the then city of Potsdam and is part of the UNESCO World Heritage. Frederick the Great wanted to spend his summer months without any worries (Sanssouci: (from French sans souci ‘without worry’) “).

The Sanssouci Palace is a single-storey, elongated palace. Originally it was only intended as a summer palace, but Frederick II spent most of the year there. The castle was built after a model of a French “maison de plaisance”. The associated famous garden view of Sanssouci was created after Frederick the Great’s decision to create a terraced vineyard on the southern slope of the Bornstedt ridge. There used to be oaks on the hill.

After Frederick the Great had the mountain terraced in 1744, wine was grown there. On top of the vineyard, he had the castle built in the baroque style. Friedrich and Knobelsdorf were in a violent argument before the building was erected. Because the builder wanted to build a cellar under the castle, but Friedrich didn’t. For this purpose, the castle should be built at ground level. Knobelsdorf bowed to Friedrich and so the palace was built according to his wishes. It was inaugurated on May 1, 1747 by Friedrich II with a banquet.

The castle has several interiors. These include the entrance hall, the ballroom (marble hall), the royal apartment and five guest rooms.

“Old Fritz”, as he was popularly known, died on August 17, 1786 in the armchair of his study in Sanssouci Palace. According to his own instructions, he wanted to be buried in a crypt next to his favorite dogs. However, it was not until midnight on August 17, 1991 that the coffin of Frederick the Great was buried in a solemn ceremony on the terrace of the Sanssouci Palace.

Opening times of the Sanssouci Palace

Tickets & tours for the Sanssouci Palace