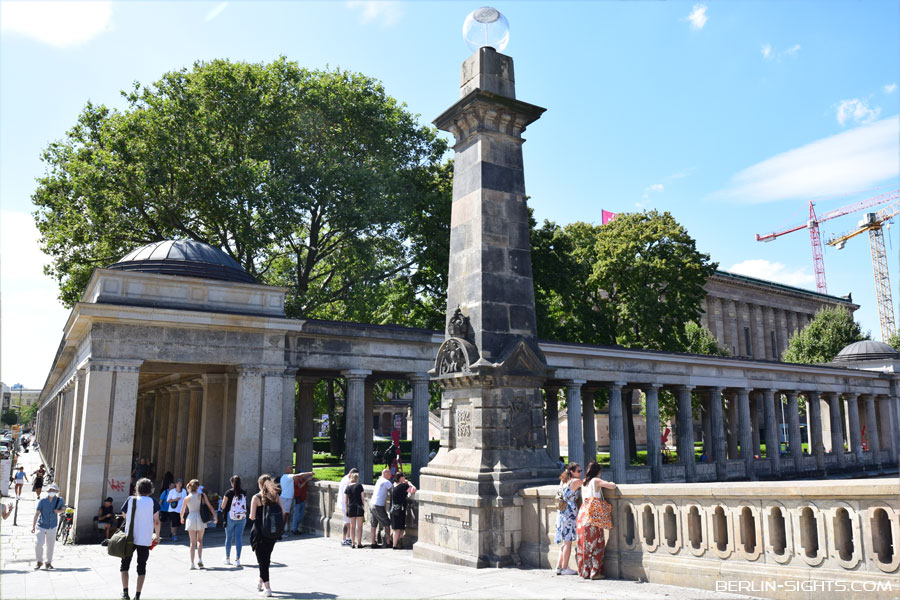 One of the most important Berlin Sights is the Museum Island in Berlin Mitte. Here you will find information, tours and tickets for Museum Island Berlin.

The Museum Island consists of five museums – the Old Museum, the New Museum, the Old National Gallery, the Bode-Museum, the Pergamon Museum and is one of the most important museum complexes in Europe. The museums house unique collections on the art and cultural history of Europe and the Mediterranean region, primarily archaeological collections and 19th century art. Friedrich Wilhelm IV had the idea for the Museum Island. Today an equestrian statue on the steps of the Alte Nationalgalerie commemorates him.

Museum Island has been a UNESCO World Heritage Site since 1999.

In addition to the five museums, the Kolonnadenhof and James-Simon-Galerie (entrance building and visitor center) should also be mentioned. The sculptures in the Colonnade Courtyard are part of the National Gallery’s collection and give visitors a first foretaste of other exhibits.

The Old Museum, built between 1823 and 1830, is the first exhibition building on Museum Island Berlin. It stands directly opposite the City Palace and next to the Berlin Cathedral. The builder was Karl Friedrich Schinkel. It was Prussia’s first public museum.

The magnificent building of the Altes Museum is modeled on the Pantheon in Rome. It houses a collection of antiquities with sculptures, ceramics, weapons, jewelry and equipment from Greek art and cultural history.

The Royal Prussian Museum was built between 1843 and 1855. Today it bears the title Neues Museum and was built by Friedrich August Stüler. However, it was badly destroyed in the Second World War and then restored with extensive renovation and restoration work until 2009. Today the Neues Museum houses exhibits from prehistory and early history. In particular, the Egyptian Museum and Papyrus Collection is one of the visitor magnets. The most visited bust of Nefertiti can also be found here.

The Bode Museum, built by Ernst von Ihne, includes the Museum of Byzantine Art, Byzantine works of art from the 3rd to the 15th century, a sculpture collection of Italian and German sculptures from the early Middle Ages to the 18th century, and many other treasures. The neo-baroque museum resembles a moated castle and stands on the tip of the Museum Island Berlin.

The Pergamon Museum is one of the visitor magnets on Museum Island. It was designed by Alfred Messel under the direction of Ludwig Hoffmann and built between 1907-30. It houses archaeological finds as well as Greek and Roman sculptures from the collection of antiquities, the Middle East Museum with 6000 years of history, art and culture of Middle East and the Museum of Islamic Art with art from the Islamic peoples from the 8th to the 19th century.

Except for the Pergamon Museum and the New Museum, all museums are closed on Mondays.

With the Berlin WelcomeCard Museum Island you get free entry to all museums and collections on Berlin’s Museum Island as well as 72 hours of free public transport in Berlin as well as many other discounts.