The Berlin TV tower is one of the ten most popular sights in Germany and therefore one of the must-see sights in Berlin Sights. It is one of the hallmarks of Berlin and shapes the city skyline. You can discover the whole city from the top. Here you will find information and tickets for the TV tower.

At 368 meters, the Berlin tv tower is the tallest building in Germany. It is also the fourth tallest television tower in Europe. It has a viewing platform at a height of 203 m and a rotating restaurant at 207 m. It rotates once on its axis in one hour. From the revolving restaurant Sphere and also from the panorama bar you can enjoy the breathtaking view over Berlin with drinks and food. It is located in the Mitte district of Berlin, right on Alexanderplatz and is therefore very easy to reach by public transport.

Work on the foundation began in 1965. The Berlin television tower was completed in 1969 and inaugurated on October 3, 1969. At that time it was the second tallest television tower in the world. Internally, it was also referred to as “Telecommunication Tower 32”.

Its main function is the location of several stations for radio and television. The television tower was built by Hermann Henselmann and the group of architects from the state-owned company (VEB) Industrie Projektierung (Ipro) Berlin. In the meantime, the project was even under the overall management of the then president of the German Building Academy, Gerhard Kosel. 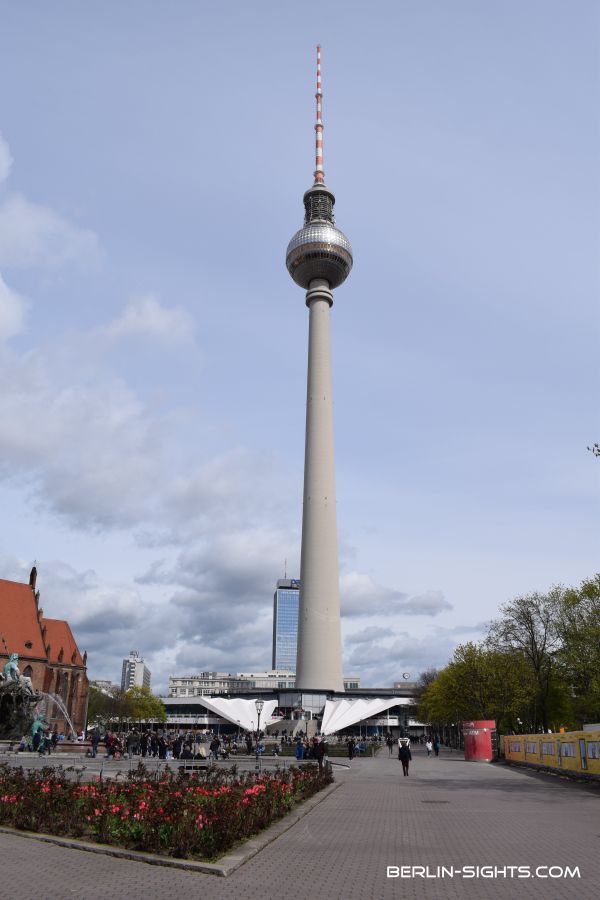 Today the Berlin TV tower is a Berlin landmark. During the GDR era, the striking building was a politically occupied national symbol of the GDR, which was supposed to symbolize the superiority of socialist society. Due to its universal and timeless design, after the German reunion it became a symbol of the whole city. Now like the Brandenburg Gate, it shapes the silhouette of the German capital.

The Berlin TV Tower has also been listed as a monument since 1979.

The ride in the elevator to the viewing platform takes about 40 seconds. The visibility is up to 80 kilometers in good weather.

Tickets for the Berlin tv tower

More than a million visitors annually visit this sight. Every day, numerous visitors from all over the world flock to the Berlin TV tower. Everyone has one goal – to enjoy the view over Berlin from the observation deck.

Since only a limited number of visitors can visit the television tower, we recommend purchasing tickets in advance. You can thus avoid long queues.

Opening hours of the observation deck